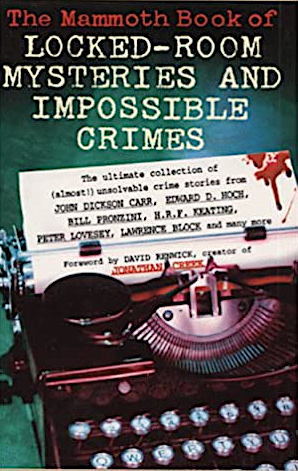 It seems everyone loves a locked-room story, and why not? If you read mysteries for the puzzle, there’s none better than the locked-room or impossible crime story. This is a really good, extensive anthology sure to keep you guessing throughout. Even if you’ve read some – or all – of these before, it’s a treat to reread them. Highly recommended!

Forward by David Renwick
Introduction: Hey, Presto! by Mike Ashley
“Waiting for Godstow” by Martin Edwards
“The Odour of Sanctity” by Kate Ellis
“A Traveller’s Tale” by Margaret Frazer
“The Silver Curtain” by John Dickson Carr
“The Stolen Saint Simon” by Michael Kurland “The Problem of the Crowded Cemetery” by Edward D. Hoch
“Death Rides the Elevator” by Lois H. Gresh & Robert Weinberg
“The Burglar Who Smelled Smoke” by Lynne & Lawrence Block
“No Way Out” by Michael Collins
“Off the Face of the Earth” by Clayton Rawson
“Murder Strips Off” by Amy Myers
“Out of His Head” by Thomas Bailey Aldrich
“The Doomdorf Mystery” by Melville Davisson Post
“The Adventure of the Jacobean House” by C.N. & A.M. Williamson
“The Motor Boat” by Jacques Futrelle
“Murder in the Air” by Peter Tremayne
“The Pulp Connection” by Bill Pronzini
“Stag Night” by Marilyn Todd
“Mr. Strang Accepts A Challenge” by William Brittain
“The Legs That Walked” by H.R.F. Keating
“The Next Big Thing” by Peter T. Garratt
“The Second Drug” by Richard A. Lupoff
“Ice Elation” by Susanna Gregory
“The Mystery of the Taxi-Cab” by Howel Evans
“Heartstopper” by Frank M. Robinson
“Blind Eyes” by Edward Marston
“The Amorous Corpse” by Peter Lovesey

AFTERWORD: Impossible Crimes by Mike Ashley, which is full of information and suggested other reading.
Copyright and Acknowledgments