The Autumnlands Volume 1 by Kurt Busiek 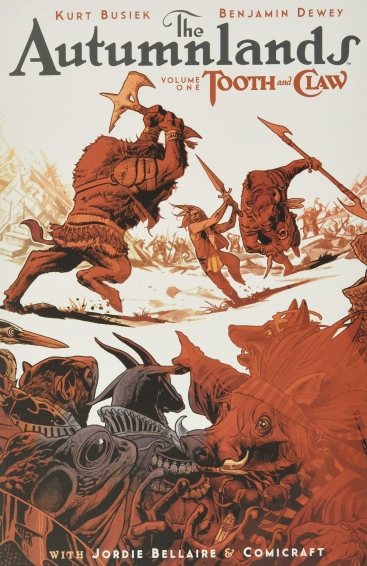 I was in the mood to read a graphic novel and came across this in an article in Mike Glyer’s blog File 770. I’m familiar with Busiek’s writing from various other works, including Astro City and Arrowsmith, and he was with CrossGen Comics when I was there, so I thought this would be a good choice, and I was right.

When the wizards of the Autumnlands reach through time to bring back a legendary hero, they don’t get the savior they expected. But in a shattered, besieged city, he’s their only hope of survival—and possibly their entire world’s, as well. This collects The Autumnlands: Tooth & Claw #1-6.

The writing and artwork are both excellent, and I enjoyed this immensely. Highly recommended for graphic novel fans! I also have volume 2 in hand and am saving it until I finish the novel I’m currently reading. The series is being revived by Image Comics and I’m already eager to continue with it.

Also, fans of Busiek’s Arrowsmith series may be interested in a forthcoming hardcover of the entire story coming in a month or two.

Enjoying life in Portland, OR
View all posts by Rick Robinson →
This entry was posted in Books & Reading, Friday Forgotten Books, Short Stories. Bookmark the permalink.

6 Responses to The Autumnlands Volume 1 by Kurt Busiek