“The arrival of the bus was timed to perfection. Nobody of the slightest importance saw it at all.” 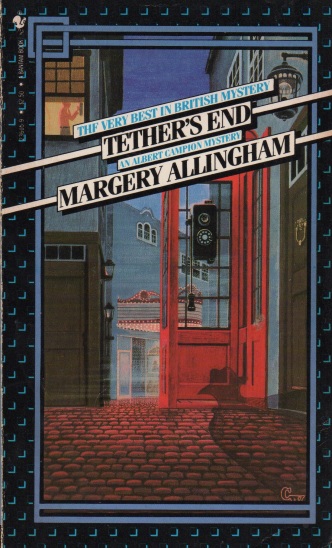 Unlike the larger-than-life master criminal of Mystery Mile or the politically motivated villain in Traitor’s Purse, the subject of the police pursuit, aided by Confidential Investigator Albert Campion, in this book is of a type often found in current mystery fiction: a man of no morals seeking personal gain.

Inspector Luke has a theory that a recent crime may be tied to an old one, farfetched as that may first seem. Campion becomes the sounding board for Luke’s hunch and is dragged into an intriguing case. Though the crimes occurred in the same general location, there doesn’t seem to be any common motive. It is left up to events to reveal the facts.

Annabelle Tassie has come up from the country to stay with a relation at Tether’s End, and her childhood companion Richard Waterfield who works in London has come to meet her. She’s no longer the little girl he remembers and he is struck by her beauty to the extent that he falls in love. When he sees a man coming from the house in which she will be staying, he follows to try and ascertain who he is and what his business might be. Thus begins a day which will end in terror for both Richard and Annabelle while Campion and Scotland Yard begin solving a puzzle with more pieces than expected.

This is an excellent example of Allingham’s mature writing and characterization. Campion isn’t in the least silly in this one, though he does look at events in a different way from his friends at The Yard. It’s a good thing for Annabelle that he does!