I’m continuing to read the series of mysteries featuring Braynt & May, written by Christopher Fowler. This is the 4th.

The Blurb (from Goodreads):
The odd couple of detection — the brilliant but cranky detectives of London’s Peculiar Crimes Unit — return to investigate a crime tailor-made for them, a controversial artist is murdered and displayed as part of her own outrageous installation. No suspects, no motive, no evidence–it’s business as usual for the Unit’s cantankerous Arthur Bryant and John May.

But this time they have an eyewitness. According to twelve-year-old Luke Tripp, the killer was a cape-clad highwayman atop a black stallion. 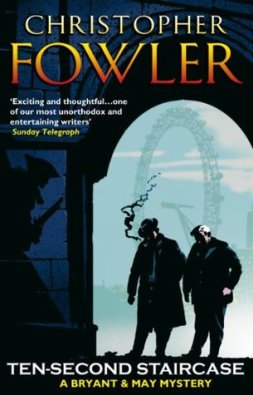 As implausible as the boy’s story sounds, Bryant and May take it seriously when “The Highwayman” is spotted again, striking a dramatic pose at the scene of his next outlandish murder. Whatever the killer’s real identity, he seems intent on killing off a string of minor celebrities while becoming one himself.

As the tabloids look to make a quick bundle on “Highwayman Fever,” Bryant and May, along with the newest member of the Unit, May’s agoraphobic granddaughter, April, find themselves sorting out a case involving an unlikely combination of artistic rivalries, sleazy sex affairs, the Knights Templars, and street gang feuds. To do it, they’re going to have to use every orthodox–and unorthodox–means at their disposal, including myth, witchcraft, and the psychogeographic history of the city’s “monsters,” past and present.

And if one unsolvable crime weren’t enough, this case has disturbing links to a decades-old killing spree that nearly destroyed the partnership of Bryant and May once before…and may again. The Peculiar Crimes Unit is one murder away from being closed down for good–and that murder could be their own.”

My take: I really liked this one a lot. It’s the characters who keep me turning the pages, but this time the crimes are just as compelling. I love this series!