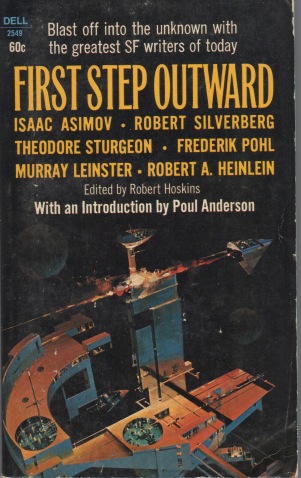 The cover suggests we “Blast off into the unknown with the greatest SF writers of today”, “today” being 1969. The authors here are a who’s who in the field at the time.

Today, a Millenial or Gen Whatever science fiction reader would likely find these stories too old and creaky to be worth notice, especially since science has caught up to much of what’s here. But older readers, such as myself (born in 1945, I’m at the beginning of the Baby Boom age) find these fun and can appreciate both the stories and the viewpoints. I found my very nice copy on eBay. I’ve made a few notes on specific stories after the contents list, below.

Two of the stories here were in one or the other of the old SF Anthologies I’ve posted recently, “Sunrise on Mercury” and “First Contact”. The latter was oft-anthologized, and for good reason, it is truly a classic, and a favorite of mine. “The Man Who Lost the Sea”, on the other hand, which I’d read before, not so much. Though I have read and was impressed by Sturgeon’s novel More Than Human it seems to me much of his writing, including this story, is just strange.

The Asimov story is one of his lesser efforts, and though I liked it, “Jetsam” shows it’s age. Overall, though an anthology of it’s time, which you might enjoy.

Enjoying life in Portland, OR
View all posts by Richard Robinson →
This entry was posted in Anthology, Books & Reading, Science Fiction. Bookmark the permalink.