The rest of the bunch of books on the shelf we saw last week. 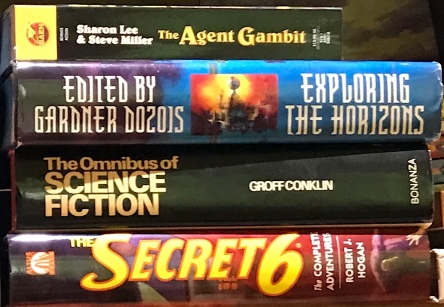 The Agent Gambit by Sharon Lee and Steve Miller. Another of the books in the Liaden Universe series.

Exploring the Horizons: Explorers and the Furthest Horizon edited by Gardner Dozois, a science fiction anthology that was last Friday’s FFB post.

The Omnibus of Science Fiction, edited by Groff Conklin, an anthology of science fiction short stories edited by Groff Conklin. It was first published in hardcover by Crown Publishers in 1952, and reprinted in 1953; a book club edition was issued by the same publisher with the Science Fiction Book Club in the same year. This edition by Bonanza Books/Crown Publishers in 1984.

The book collects forty-three novellas, novelettes and short stories together with an introduction by the editor. The stories were previously published from 1912-1952 in various science fiction and other magazines.

The Secret Six by Robert Hogan, The Complete Adventures of the stories from the pulps.

Enjoying life in Portland, OR
View all posts by Richard Robinson →
This entry was posted in Books & Reading, Shelf Shots. Bookmark the permalink.