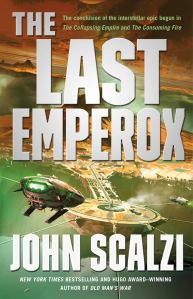 Book One: The Collapsing Empire introduces The Interdependency, a thousand-year-old human empire of 48 star systems connected by the Flow, which is a phenomenon allowing faster-than-light travel. Each stream is one way and has an entry point and an exit point. Innterstellar trips are not instantaneous—ships carrying mail or passengers from Hub, the capital of the empire and the system with the most Flow connections, arrive at End, the most distant, nine months later—but the network permits life-sustaining intersystem trade. As a natural phenomenon, the Flow is poorly understood.

Family-owned megacorporations control all interstellar trade in the Interdependency’s mercantile economy; one, House Wu, is the royal family, headed by the Emperox, the leader of the whole shebang.

Count Claremont, a physicist on End, calculates after decades of study that the Flow will soon collapse. All systems will be isolated; none are self-sufficient. Humans can only live on a planetary surface on End; they need space stations or underground habitats in other systems. Without the Flow, society on every system will likely collapse. The count sends his son Marce, also a physicist, to Hub to warn the Emperox. But there are rival houses who want to take control.

Book Two: The Consuming Fire. As it becomes clear that the flow streams are collapsing, or will collapse within decades, conflict between the houses escalates. The flow stream from End is gone, so anyone trying to go to the only place where humans can live on the surface, and be self sustaining, becomes a one-way trip. Several attempts on the Emperox’ life are made as the major houses try to take control and assure they and theirs get to End and safety. It begins to look like billions may die. Is there any solution?

Book Three: The Last Emperox. As tensions mount, Marce Claremont and the Emperox seek a solution to the collapsing flow streams that will allow more people to survive. Claremont discovers “evanesce”, temporary flow streams that may be used to ease the problem of movement within the Interdependency, and perhaps to discover new streams to now unknown locations. Could these lead to a new planet where humans could survive?

My take: There is a major shocker about two-thirds or three-quarters of the way into the novel which I will not reveal. Many but not all problems are solved by the end of the book.

The trilogy is well written in Scalzi’s easy to read style, and moves along well, with some slower parts filled with discussions of politics or the science of the flow. One character in particular, though quite likable, does use the “F word” to excess.

Overall, I was disappointed, though there is a lot to like in this hard science fiction trilogy, those slow parts dragged for me, and I didn’t think the ending, after all those pages, satisfied as much as I expected, or wanted. Scalzi is a fine writer, and I’ve read everything he’s written, but I didn’t feel he was at his best with these. Other readers have praised it, considering it very good indeed. So, as usual, it’s in the eye of the reader.

Enjoying life in Portland, OR
View all posts by Richard Robinson →
This entry was posted in Books & Reading, current reading, Science Fiction. Bookmark the permalink.