Posted on December 29, 2019 by Richard Robinson

Continuing with the books I received for Christmas…

The Bellamy Trial by Francis Noyes Hart.
One of the very first legal thrillers. Hart (1890-1943) drew on accounts of the 1922 Hall-Mills murder, the most notorious of her day. But the trial of Stephen Bellamy and Susan Ives for the fatal stabbing of Bellamy’s wife would have been sensational on its own. Mimi Dawson had been romantically involved with both self-made stockbroker Patrick Ives and equally eligible Elliot Farwell, and Pat had eloped with Sue Thorne, Elliot’s former girlfriend whose wealthy father disinherited her in disgust, only a few days before Mimi married Stephen. The combustible mixture of once and future lovers, linking Pat and Mimi once more despite their marriages to others, boils over when Mimi is found stabbed to death in the gardener’s cottage on the grounds of Orchards, the old Thorne estate. “For both nostalgia buffs and casual readers, this seminal tale of legal intrigue holds up remarkably well.” – Kirkus Reviews

The Complete Casebook of Sgt. Brinkhaus by Frederick Nebel.
Following Donahue and Cardigan, Frederick Nebel’s longest-running detective series featured the hard-boiled exploits of Sgt. Otto Herman “Brinky” Brinkhaus and Inspector Peter Larsen of the Portsend Detective Bureau as chronicled in the pages of Detective Action Stories, Dime Detective Magazine, and Detective Fiction Weekly. Now, for the first time, all of their cases are reprinted in another volume in the uniform Nebel Library by Altus Press.

The Complete Cases of The Rambler by Fred MacIsaac 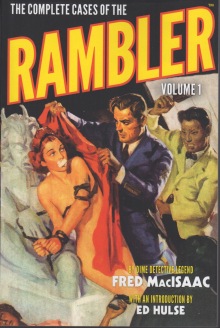 Meet the “Rambler”: peripatetic newspaper reporter Addison Francis Murphy. A tall, rangy redhead, the Rambler behaves like a tramp, wandering from city to city, often arriving on a railroad boxcar, never taking root. Renowned for his reporting skills and deductive abilities, Frank Murphy never has any difficulty landing a job with the local newspaper; wherever he winds up, he finds that his reputation has preceded him. The Rambler has a knack for getting into trouble, and every search for a front-page scoop puts him in jeopardy sooner or later. He seems to have a genius for running afoul of violent gangsters, wealthy businessmen, corrupt politicians, crooked cops, and the occasional double-crossing dame.

Created by Fred MacIsaac, at one time a redheaded journalist himself, Frank Murphy rambled through 19 terse, tough yarns published between 1933 and 1940 mainly in the pages of Dime Detective, the prestigious crime pulp second only to the legendary Black Mask in its impact on the genre.

Enjoying life in Portland, OR
View all posts by Richard Robinson →
This entry was posted in Adventure, At Home in Portland, Books & Reading, Mystery. Bookmark the permalink.