Current Reading: The Adventure of the Peculiar Protocols by Nicholas Meyer

The Adventure of the Peculiar Protocols by Nicholas Meyer, Minotaur Books, 2019 hardcover, mystery 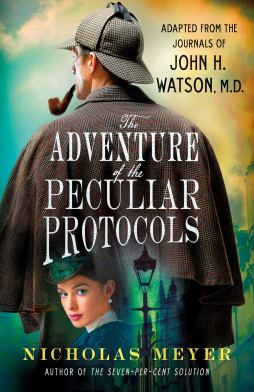 In 1974 I bought, read, and enjoyed The Seven-Percent Solution by Meyer. There weren’t many Sherlock Holmes pastiches being written at the time, or at least not many in the public eye, so it was a real treat. Two years later, I read The West End Horror, Meyer’s second Holmes pastiche, and liked it also. So when I read that this book was coming, I was anticipating another fun, well-written book, and got in the very long line for it at the library.

Between 1976 and 2019, I’ve read very many Holmes pastiches, both novels and short stories. Most of them were well written, some really excellent. I like to believe my tastes have been developed, my appreciation of a good pastiche improved. Thus I’ve gotten somewhat more critical in that regard.

I dove into this book with high expectations, but I had not taken into account Meyer’s writing style, not anticipated his efforts to bring some aspects of the characters of Holmes and Watson up to date. I found some of that distracting, and I also felt the plot was drawn out beyond the book’s ability to carry it. This would have been better as a longish short story or novelette. Still, worth reading.

Have you read this book?
What are you reading?

14 Responses to Current Reading: The Adventure of the Peculiar Protocols by Nicholas Meyer