The Shadow: “Lingo” by Maxwell Grant (Walter  B. Gibson), forward by Jerry Robinson, The Shadow Volume 9, Nostalgia Ventures 2007, oversized trade paper, “Lingo”, from The Shadow Magazine, April 1, 1935,  plus “The Shadowy Origins of Batman” by Will Murray, and “Spotlight on The Shadow” by Anthony Tollin 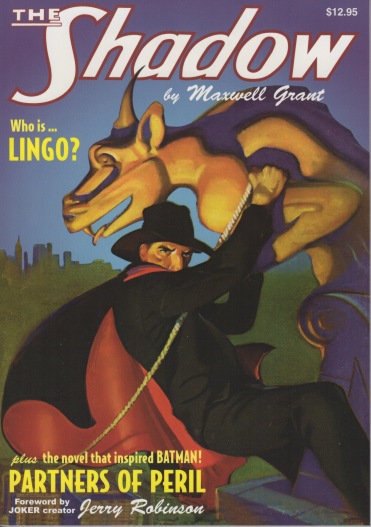 I don’t remember listening to The Shadow on the radio, not did I ever see any of the pulp magazines featuring him. In spite of that, I was familiar with the character by reputation. At some point I bought a couple of the novels in cheap hardcover format and liked them, so when I learned of these Shadow reprints, I decided to buy some and give them a try.

In no particular order I took this one of the shelf and read it.

The first, longest part of this is the Shadow novel Lingo. The title character is a top mob boss who controls most of the other bosses running rackets and scams in New York. Naturally, The Shadow is fighting against this group and, in addition to tipping of the Cops when he learns of gang activity, he takes an active role in their defeat. Two previous top bosses have been rubbed out by the very mobs they rule, and keeping the mobs at war with each other seems to be working fine until one top boss sets up a fake hit on himself and Lingo takes over.

There’s plenty of gunplay and of course The Shadow does a lot of slinking around while no one seems to see him, cloaked in black and shifting through the shadows of night. And of course there’s a twist at the end.  This was a lot of fun, and pulp readers will enjoy it.

Enjoying life in Portland, OR
View all posts by Richard Robinson →
This entry was posted in Adventure, Books & Reading, Friday Forgotten Books, Mystery. Bookmark the permalink.