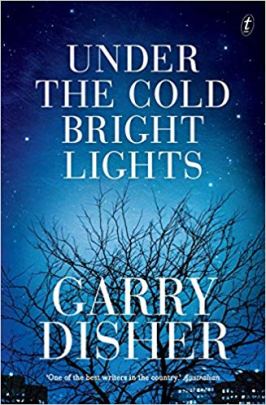 In this very nicely written mystery novel, Disher brings us former homicide detective Alan Auhl, who has come out of retirement to handle cold cases. His small team look into the discovery of a body found under an old concrete slab in a rural area near Melbourne, Australia. Discovered when it’s necessary to tear up the slab questing for a copperhead snake, the snake is recovered and the body is found.

Their first task is to identify the “Slab Man”, as the press calls him, a shooting victim, then to figure out who killed him and why. Another case for Auhl centers on a self-important doctor whose first and second wives died mysteriously, and who now believes his third wife wants him dead. Meanwhile, Auhl is managing a strange household of lodgers, including a fearful young mother involved in a bitter custody dispute over her 10-year-old daughter.

Auhl crosses all kinds of lines to help people. The focus on such crimes as child abuse and religious scamming serves to show how justice is rarely gotten through institutional means. Though I thought the story dragged in places, Disher tells a good story with an very interesting character. I hope we see more of Detective Auhl.

Meanwhile, what are you reading?

12 Responses to Current Reading: Under the Cold Bright Lights