Colonists on Mars: ever a popular science fiction storyline. This time it’s a good guys vs. bad guys with the Martians caught in the middle. It represents the first appearance of Heinlein’s idealized Martian elder race, which will reappear in Stranger in a Strange Land.

The Plot
The novel is set in the future when Mars has been colonized by humans, but is administered by a governor appointed by the Earth government and the colonists have no political power. On Mars, colonial teenagers Jim Marlowe and Frank Sutton travel to the Lowell Academy boarding school for the start of the academic year. Jim takes along his native Martian pet, Willis, who is a Bouncer, a round fur covered ball the size of a vollyball, who is about as intelligent as a human child and has a photographic memory for sounds, which he can also reproduce perfectly.

The trip is along the frozen Martian canals (it’s Winter) in a skate boat. At a rest stop, Willis wanders off and encounters one of the adult sentient Martians. The three-legged alien takes the two boys and Willis to join a ritual called “growing together” with a group of its fellows. They also share water, making Jim and Frank “water friends” with the Martian, who is named Gekko. 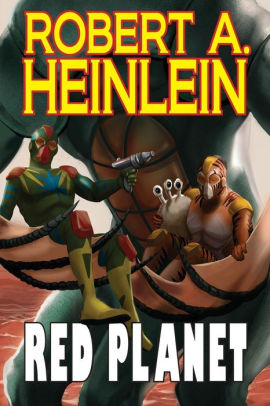 At school, the well-liked and respected headmaster is retiring, and Mr. Howe is sent from Earth to replace him. Howe used to run a military academy, and believes in strict adherence to rules, and there are lots of them.

Jim gets into trouble when the authoritarian Howe, who confiscates Willis, claiming that it is against the new rules to have pets. After Jim and Frank rescue Willis, the bouncer repeats two overheard conversations between Howe and Beecher, the unscrupulous colonial administrator of Mars, detailing Beecher’s plans for Willis and the colony. When Beecher learns Howe has a bouncer, he is ecstatic, since the London Zoo is willing to pay a hefty price for a specimen. Worse, Beecher is secretly planning to prevent the annual migration of the colonists (to avoid the most severe months of winter weather) in order to save money. The boys run away from school to warn their parents and the colony.

The boys decide to return home to warn their parents. During the trip, Frank gets sick. On the third night, they are forced to take shelter inside a giant Martian cabbage plant (nearly suffocating when it folds up at night). The next day, they meet some native Martians, who accept Jim because of his relationship to Willis and water-friendship with Gekko. The Martians treat Frank’s illness and send the two boys home by a formerly unknown to the colony subway.

Once warned, Jim’s father quickly organizes the migration, hoping to catch Beecher off guard. The colonists take over the boarding school, and they turn it into a temporary shelter. Howe locks himself in his office, while Beecher sets up automatic, photosensor-controlled weapons outside to stop the malcontents (as he calls them) from leaving. After two colonists are killed trying to surrender, and the power to the building is cut, the colonists decide they have no choice but to fight back. The colonists organize a raiding party, with the boys taking part, capture Beecher’s office and proclaim the colony’s independence from Earth.

Several Martians enter the town and shortly afterward both Howe and Beecher disappear. The Martians had been content to allow humans to share their planet, but Beecher’s threat to Willis has made them reconsider. They present the colonists with an ultimatum to leave the planet. Dr. MacRae negotiates with the Martians, and is able to persuade them to let the colonists stay, mainly because of Jim’s strong friendship with Willis.

My Take
Red Planet is better than the first two in this “series”, by quite a lot.  The edition I read had the original ending restored. Compared to the first two juvenile (YA) novels, the plot in this one has more elements and depth, but the interactions between the boys is still very YA indeed. This is often considered as the first truly successful of the Heinlein juveniles.  Next time: Farmer In the Sky.