The Rolling Stones by Robert Heinlein, (published in the U.K. under the title Space Family Stone in 1952. 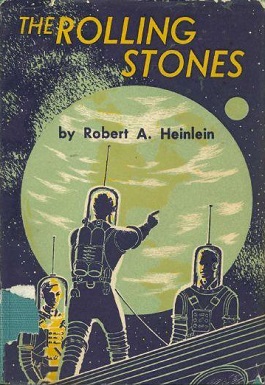 No, it’s not forgotten, none of Heinlein’s juvenile SF novels are, really, but I recommend them, some more, some less, so here we go.

For a break from reading mysteries, I was in the mood for an oldie by one of the “big three”, Asimov, Clarke or Heinlein. At least they were the big three when I was reading a lot of SF when I was in high school and college. Now? Who knows who the “big three” would be, if such even exists.

Since I read Heinlein’s Space Cadet and Have Space Suit, Will Travel not too long ago – well, in the last few years, – I picked this one.  Naturally, I read this when I was a teenager, and as far as I recalled it was just as good as all his other “juveniles.

This time I discovered The Rolling Stones didn’t stand up as well as those other books. I found it to be, well, too juvenile. The interaction within the family reminded me a lot of what we might experience in a late 1950s – early 1960s family comedy. I’m thinking of Leave it to Beaver, My Three Sons, or Ozzie and Harriet. That sort of thing.

The Stone family lives on Luna, the father is a writer of radio adventure serials, mother is a medical doctor, grandmother is a scientist (retired), the three kids, all sharp as tacks, do great in school and have had success and with inventions.

The family decides to pull up stakes and head of to Mars. After a few months there they move on to the outer planets. Enjoyable, but very light. My next Heinlein’s juvenile will be Starman Jones.