On April 28, I posted (here) on the first of the three Sheriff Hank Worth novels by Claire Booth. Here are the second and third.

Sheriff Hank Worth is called out to investigate the theft of elm tree bark, apparently, once processed, a valuable herbal supplement. There he meets the talkative and combustible property owner, Vern Miles, who is trying to make enough money off the land he just inherited to pay the taxes on it.

The thieves have stripped so much of the bark that the trees are now dying, so Miles decides to go ahead and cut the whole grove down. The only thing is, he uses undocumented workers to do it, and when Hank and Sam stop by the clearing in the woods to check on things, the whole crew takes off like a flock of birds. One unfortunate runaway laborer tumbles into a deep crevice and lands on not one, but two bodies—a month-old rotten corpse and a decades-old child skeleton.

Hank suddenly finds himself in the midst of two separate murder investigations, not to mention tree bark theft, all while running for re-election as county sheriff. 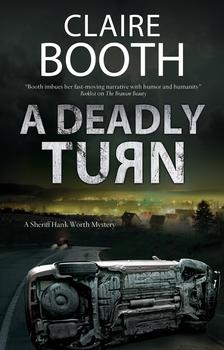 Hank Worth thinks he’s performed a good deed when he pulls over the car of six teens caught speeding on a Saturday night and lets them off with a warning and instructions to go home. When he responds to an urgent call minutes later, he realizes he made a fatal error of judgement – the car has smashed on a turn, every teen is dead. Struggling to come to terms with his role in the crash, Hank begins to suspect foul play. While notifying the parents of the children involved, his suspicions grow when an unidentified body is discovered in one of their homes and a teenage girl is found after apparently attempting to commit suicide. Hank believes the incidents are connected, but those around him disagree. Is Hank right, or is his guilt making him search for answers where there are none?

My take:
I read the books in this series out of order; first seeing an interview with the author on Jungle Red Writers blog, in which she discussed the latest book, then later seeing a review of it.

I liked it quite a bit so I hunted up the first two at the library. I enjoyed seeing the growth of the main character and the books are well plotted and written. They get better as the series progresses. I’ll be on the lookout for the next whenever it’s published, which is soon, I hope.

The Hank Worth series: