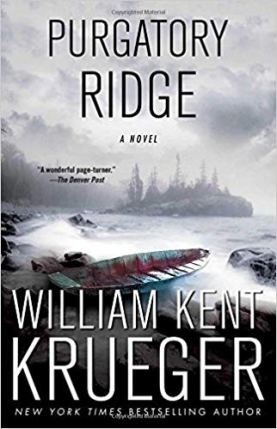 This is the third book in the Cork O’Conner series, and as much as I liked the first two, this may be even better.

* This book begins as Karl Lindstrom’s lumber mill explodes in the early morning hours, killing Ojibwe elder Charlie Warren. Lindstrom has planned to cut “Our Grandfathers”, a grove of old-growth white pines sacred in tribal lore. The local Native Americans are up in arms over Lindstrom’s plan.

As word gets out, conservationists have descended on the town, eager to save the 300-year-old trees. When a person identifying himself as the Eco-Warrior, soldier of the Army of the Earth, claims responsibility for the bombing, the Native Americans are suspected of collusion as Cork’s wife, Jo, attorney for the tribe, protests their innocence. The quest to identify the Eco-Warrior bomber ultimately focuses on a young outsider, Brent Hamilton, and his zealous mother, who was crippled in a similar bombing. But the number of suspects widens to include the editor of the local newspaper, who has a grudge again Cork and is rumored to be the commander of the secret militant Minnesota Civilian Brigade.

*some of this summary from Publisher’s Weekly

My take: Smart, suspenseful, with beautifully crafted characters and setting, this is a fine mystery novel, not to be missed.