Posted on February 7, 2019 by Richard Robinson 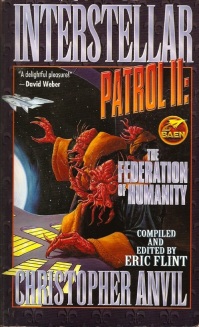 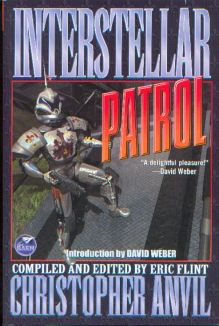 The pseudonym of Harry C. Crosby Jr., “Christopher Anvil” was one of my favorite authors in the days I was reading Astounding Science Fiction a long time ago. I’m talking about when John Campbell edited it, and before it became Analog, though Anvil stories appeared after the name change.

That’s where I  read “Pandora’s Planet” in 1956, and I was hooked. Baen published Pandora’s Legions in 2002 which contains “Pandora’s Planet” and  the rest of the Centra series. Then in September 2004 came the first of these two collections. Interstellar Patrol collects 14 stories, the first half of Anvil’s Colonization series of stories. Those stories were originally published in random order, but editor Eric Flint did a nice job of putting them into a fairly coherent saga. In 2007 came the second, massive, volume Interstellar Patrol II, with 23 stories, the rest of the Colonization series of stories.

John Clute in his excellent Encyclopedia of Science Fiction describes Anvil’s work as “archaic, simplistic and insistently readable”. For me these are a “guilty pleasure” of good old science fiction enjoyment. These are books to read in a gleeful swoop. Anvil’s sense of the absurd, his ability to twist logic and invest his characters with simultaneous strength and frailty makes the people and organizations in these stories a delight. These Interstellar Patrol stories include several first contact tales that are hilarious and thought provoking.

If anyone has wondered if there is a place in science fiction for humor, irony and fun in science fiction, I believe the answer – yes – lies in the stories collected in these volumes, and in the rest of Anvil’s work. I liked these a lot.