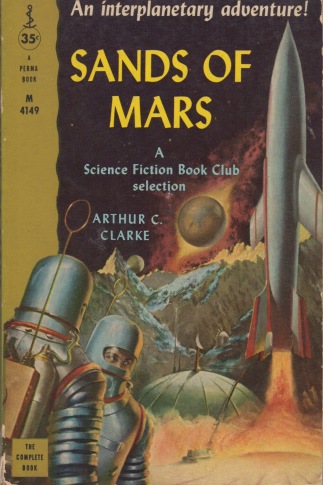 I bought this copy of Sands of Mars, when I was in high school. At the time it was the first novel by the popular short story writer. I read it, and liked it, and then put it away on the shelf. It’s held up pretty well through rereadings, the latest last month. It’s now considered a classic, though it would be another year before Clarke received a Hugo nomination for his next novel, A Fall of Moondust.

The story was published in 1951, before humans had achieved space flight. It is set on the way to, and on the planet Mars, which has been settled by humans and is used essentially as a research establishment. The story setting is that Mars has been surveyed but not fully explored on the ground.

[summary edited from Wikipedia]
“Martin Gibson, a famous science fiction author, is travelling to Mars, as a guest of the crew of the spaceship Ares. After arriving at Space Station One, in the orbit of Earth, from which all interplanetary journeys start, he begins the three-month trip to Mars.

On Mars, Gibson and the crew go their separate ways. On a trip by passenger jet to an outlying research station, Gibson and the crew are forced down by a dust storm. They explore the nearby area and discover a small group of kangaroo-like creatures, the unsuspected natives of Mars. They appear to have limited intelligence by human standards and are vegetarians, living on native plants. It is later revealed that the plants are being cultivated by researchers to enrich the oxygen content of the Martian atmosphere. This project, and related others, are being kept secret from Earth.

Hadfield reveals that scientists have been working on “Project Dawn”, which involves the ignition of the moon Phobos and its use as a second “sun” for Mars. It will burn for at least one thousand years and the extra heat, together with mass production of the oxygen-generating plants, will eventually – it is hoped – make the Martian atmosphere breathable for humans.

Gibson finds himself so persuaded of the importance of Mars as a self-sufficient world that he applies to stay on the planet, and is invited to take charge of public relations – in effect, to “sell” Mars to potential colonists.”

The good: I love this classic old science fiction cover by Robert Schultz. I really like what Clarke did imagining both the flight to Mars and the way the colony there has been created and is developing. Clarke is, and always continued to be masterful at the hard science aspect of his novels and stories, and this is a good example. Everything is explained in a way that makes it easy to accept and believe, “Yes, that’s the way it would be” the reader thinks.

The bad: The plot is pretty thin. Even with a secondary plot involving Gibson and one of the crew having a connection on Earth, you could summarize the plot as fellow goes to Mars, wanders around, decides to stay. The discovery of the Martians is underwhelming, and what and who they are seems mostly a setup for ending.

Anyone used to more modern, exciting, action-packed science fiction would likely find this boring. I didn’t, but I was mindful that I was reading a classic from the early 1950s, that it was Clarke and his style, and I just wanted to enjoy the book for what it is. You may too.

This review qualifies for VintageSciFiMonth at the Little Red Reviewer blog.