Hawke’s Prey by Reavis Z. Wortham, thriller. This is the first in the Texas Ranger Sonny Hawke series. Ballard, Texas is typical small town west Texas, and not a lot happens there. But the beginning of this book changes that. A terrorist squad shoots up a border patrol stop, then enters Ballard and takes over the Courthouse.

Texas Ranger Sonny Hawke happens to be inside the courthouse, with his school teacher wife, Kelly and her class of high school students, including their twins. The terrorists are an odd bunch, comprised of jihadists, Mexican cartel members and American alt-right militia members. The man in charge put them together in that manner to confound the authorities. The mastermind had a goal, but the guy on the ground in Ballard had a different agenda: terror and control. Expect n 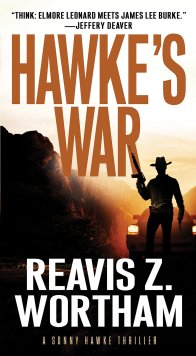 on-stop action, plenty of shell casings to fly, and because of the 100 year blizzard, plenty of cold and snow. I don’t read much high-action fiction, but I really enjoyed this.

Hawke’s War by Reavis Z. Wortham, thriller. …and this one as well. The second in the series, it picks up shortly after the above described book, and has just as much, perhaps more, action. This time Hawke is lured into an ambush in Big Bend National Park, where he is captured by some of the “bad guys” who escaped in the first book. It’s a grueling time for Texas Ranger Hawke, as authorities search for him and his captors head for the border to deliver him to the vengeful brother of the man Hawke killed in the first book. Tons of action. I liked it even better than the first book and am waiting for book 3.

Billy Boyle by James R. Benn, WWII mystery. This paperback was a freebie way back when Left Coast Crime was in Monterey, CA. I brought it home and stashed it away with the other book bag goodies, and just recently pulled it out to give it a try.

I enjoyed it more than I expected, both character and setting, World War II England, were good, and American Billy Boyle, who was a Boston cop before the draft, winds up as an aide to some guy named Ike. He stumbles his way to a satisfying conclusion to the murder mystery. I may try the next one, which the library has in ebook format.