Posted on November 25, 2018 by Richard Robinson 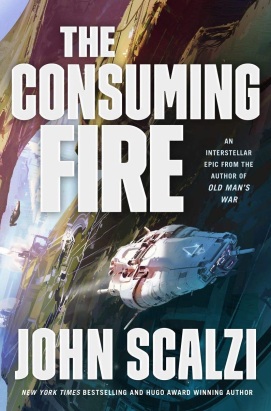 The Consuming Fire by John Scalzi, science fiction. The Interdependency series number two. This is the second in the series, following The Collapsing Empire. The Interdependency—humanity’s interstellar empire—is on the verge of collapse. The extra-dimensional conduit that makes travel between the stars possible – the Flow – is collapsing, leaving entire systems and human civilizations stranded.

Emperox Grayland II of the Interdependency is ready to take desperate measures to help ensure the survival of billions. But arrayed before her are those who believe the collapse of the Flow is a myth—or at the very least an opportunity to an ascension to power.

Scalzi sets up an interesting scenario for a star empire facing it’s possible end, and as always his characters are intriguing, if somewhat foul-mouthed. I read this in a couple of days, and it’s obvious from the ending there will be another in the series. Bring it on, Scalzi!

The Spider: The Doom Legion by Will Murray, new pulp adventure. From the jacket blurb:
“When a weird meteor crashes in the heart of Central Park on Halloween night, its uncanny light attracts the attention of Richard Wentworth—alias The Spider! Investigating, the millionaire criminologist encounters a maelstrom of madness in the making. Drawn, too, are two sinister figures from the past—international master criminals who join forces to harness the power of the pulsing meteorite. Alone, The Spider confronts his greatest challenge, but he is not alone this time. For the unholy power of the meteorite draws James Christopher, alias Operator 5, and another government agent from the past, known only as G-8…. Together, this heroic trio must battle a pair of powerful adversaries intent on harnessing and unleashing the malevolent power of the Green Meteorite. But how can they work together when one of them is branded an outlaw?”

Pretty good pulp story, Murray is really good at these.