Posted on November 11, 2018 by Richard Robinson 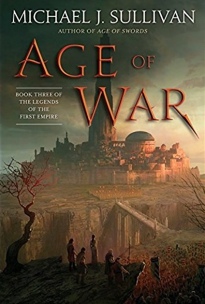 Age of War by Michael Sullivan, fantasy. I originally read about this fantasy series, The Legends of the First Empire, in the blog Black Gate, and was sufficiently intrigued to get the first book, The Age of Myth, from the library. At the time it was described as a trilogy. Since Sullivan writes all of the books in a series prior to the publication of any, I thought surely it would be safe to start a series of several books. I didn’t count on the publisher’s plans however, to only publish one book a year. Drat. Still, the first two were at the library, and this, the third, must surely be available soon, and it was. I didn’t count on the long wait for this at the library, but finally it came.

I enjoyed it a lot, perhaps even more than the first two, and am quite satisfied with the series. But there is a hiccup. Sullivan decided he couldn’t cram everything into three books, and has expanded the story to four (or more??). I’ll have to wait until April ’19 for the next, (perhaps) concluding volume. Aaarg. Yet these are very good indeed and I look forward to Spring and the next book. 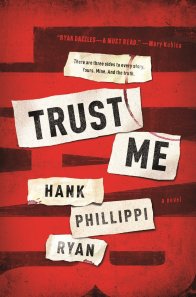 Trust Me by Hank Phillips Ryan, mystery/thriller. I’ve read the first two in Ryan’s Jane Ryland books, The Other Woman and The Wrong Girl, and liked them, so I thought I’d try the stand-alone mystery-thriller. I thought it was good, but not compelling enough to exclaim “wow!” at the end. Ryan is a solid writer and I look forward to more from her, but this wasn’t my favorite of her books that I’ve read so far.