Sort of Forgotten: Killer In the Rain by Raymond Chandler

one in a series of forgotten or seldom read books

Killer in the Rain by Raymond Chandler, stories originally published 1934-1941,
this collection © 1964 – copy shown is the Ballantine Books 1977 paperback 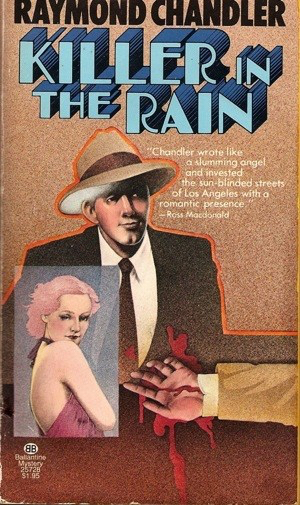 This short story collection contains 8 stories: “Killer in the Rain”, “The Man Who Liked Dogs”, “The Curtain”, “Try the Girl”, “Mandarin’s Jade”, “Bay City Blues”, “The Lady in the Lake”, “No Crime in the Mountains”.

These stories by Chandler are both less and more than they seem. Every one of them was cannibalized by Chandler and became part of a novel. Sometimes it was a character or two who made the transition, more often it was whole pieces of plot, in some cases (The Lady In The Lake) the entire story was used and became a novel by added plot and a few name changes.

In his informative introduction to this collection, Philip Durham traces the publication and cannibalization of these eight stories, part or all of which became The Big Sleep, Farewell My Lovely and The Lady in the Lake.

None of the stories in this collection appears in Chandler’s 1950 “official” short story collection The Simple Art of Murder. Once Chandler cannibalized a story he believed it should be buried, so the stories were left to fade away with the pulp magazines in which they were originally published, thus none of these stories was published by Chandler during his lifetime, though three were published in collections, which Chandler maintained were published by mistake and without his permission: “No Crime in the Mountains” appeared in Great American Detective Stories edited by Anthony Boucher (1945), “The Man Who Liked Dogs” appeared in Joseph Shaw’s The Hard Boiled Omnibus (1946) while “Bay City Blues” appeared in Verdict (1953).

This collection was my introduction to Raymond Chandler. I was wowed by the writing, and I was hooked. I read this, the collection The Simple Art of Murder and the collection Pickup On Noon Street before I ever got to one of Chandler’s novels. When I did start on the novels – with The Big Sleep if I recall correctly – I was so enthralled I didn’t notice there were pieces of the short stories I’d already read. If I had, I wouldn’t have cared. Or perhaps I noticed and just don’t remember now, after I’ve read all of Chandler so many times.

While these stories are not in the two volume Library of America set of Chandler’s works, they are to be found in the 1,300 page Raymond Chandler: Collected Stories published by Everyman’s Library, which contains all of Chandler’s short fiction, mystery and other. Whatever the source, it’s worth seeking these out. You just can’t go wrong with Raymond Chandler.

11 Responses to Sort of Forgotten: Killer In the Rain by Raymond Chandler