Posted on September 9, 2018 by Richard Robinson

The Killer Angels by Michael Sharra – historical fiction based on fact. This novel was awarded the Pulitzer Prize for Fiction in 1975. It tells the story of the four days of the Battle of Gettysburg, beginning on June 30, 1863, as the troops of both the Union and the Confederacy move into the valley around the town of Gettysburg, Pennsylvania, and continuing on July 1, July 2, and July 3, when the battle was fought. The story is character-driven and told from the viewpoint of various protagonists.

A film adaptation of the novel, titled Gettysburg, was released in 1993. I liked this one a lot.

An Informal History of the Hugo Awards by Jo Walton – non-fiction. When she says in the title of this book that this is an informal history, what that means is that it’s a combination of the lists of winners and runners-up plus her opinions on what won, what she thinks should have won (in most cases books by female authors) and then comments by Rich Horton and Gardner Dozois, both of whom’s opinions I value. Interesting, and I wound up putting several things on my library hold list and buying a few things too. 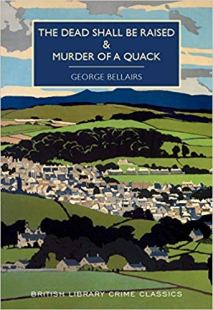 The Dead Shall Be Raised by George Bellairs – mystery.  This is one of Bellair’s shorter novels, though none of his are long by today’s standards. In this one, a body is discovered in the peat while Home Guard troops are digging a trench during maneuvers. The remains are twenty years old, and cause a reopening of a murder case from that time. Inspector Littlejohn happens to be on the scene, as he’s visiting friends during Christmastime, and the locals are only too happy to have a Scotland Yard man there to help them out. Good atmosphere, pretty good plot, interesting characters. I enjoyed it.