Posted on September 6, 2018 by Richard Robinson

another in my series of forgotten or seldom read books, this revised from a 2009 post 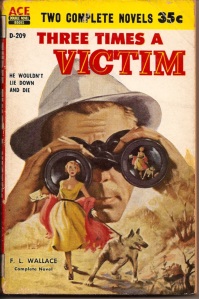 F. L. Wallace (aka Floyd Wallace), was primarily known as a science fiction writer with stories published in Astounding Science Fiction, Galaxy and others. He wrote mystery short stories and two novels, this book and Wired for Scandal, which was also published by Ace, in 1959.

P.I. Norman Hazard works in L.A., his office near a city park that is being chopped up by a freeway project. A body is found under road grading equipment, later that day another in some bushes in the park. Both were old men who visited the park frequently to play chess.

Hazard is hired to find an old man; possibly deceased. An interesting, cast of characters and good sense of place makes up for the somewhat predictable plotting, but there are enough twists and turns in 164 pages to make things interesting. I enjoyed this.

I consider this one to be good, but not great. It’s certainly  worth a look. There are inexpensive copies available, and the flip side of this Ace double is A Night for Treason by John Jakes. Yes, that John Jakes, the one who who later wrote North and South and several “family sagas”.

Or you can try for the Phantom edition. Bill Crider featured it in one of his Paperback pieces in his Pop Culture blog, with this cover and back: