Complete Psychotecnic League Stories Volume 2 by Poul Anderson – science fiction short and medium length stories. I mentioned when I listed the third volume of these stories that I was reading them out of order, and now here’s the second one. These are pretty darn good SF stories, but I think the third volume is better. 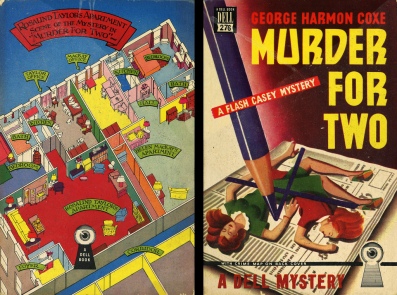 Murder For Two by George Harmon Coxe – hardboiled mystery. This is the second of Coxe’s Flash Casey novels, featuring Flashgun Casey, photographer for The Morning Express newspaper. Casey gets embroiled in a double murder in this one, the first of a reporter who

works for his newspaper, the second of a suspect in that murder. I’ll be doing a Forgotten Book post on this soon.

Planetside by Michael Mammay – military science fiction. I don’t read a lot of military science fiction as it’s seems to be defined these days as a specific sub-genre, but that’s what this first novel is, and I enjoyed it, mostly. I thought the ending was both abrupt and too easy. My only conclusion is it’s a setup for a sequel. We’ll see.