Note: while Patti Abbott’s blog Pattinaise is on hiatus,
she may not be doing her Monday “Things That Are Making Me Happy” post.
Please feel free to make a comment here on whatever is making you happy.

Stormbreaker by Anthony Horowitz – YA spy novel. After reading the cover article in Mystery Scene Magazine I decided to try various Horowitz books, and this was one of the first that was available at the library (lately my first choice for getting a book). This is the first in the Alex Rider teen spy series, which stretches to six (or more?) short novels. I thought it was okay, and I might try another, but I wouldn’t want to make a steady diet of these.

The Complete Psychotechnic League Volume 3  by Poul Anderson, science fiction short stories. I’m reading these out of order, and will follow this up with the second volume, which I had temporarily mislaid but have since found. Thank goodness, I was about to re-order it! It’s no secret I’m a Poul Anderson fan, and I have these stories scattered amongst other collections, particularly the NESFA short fiction of Poul Anderson volumes (7 so far), but I wanted these Baen editions – this is the third of three – because it’s nice to have them all together. Some of these later stories are a little weaker than his earlier ones, though also less preachy, but I believe any Anderson is good Anderson. 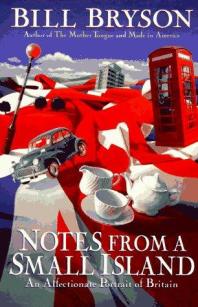 Notes From A Small Island by Bill Bryson – non-fiction, autobiographical, travel. I like Bryson’s writing. After reading A Walk In the Woods, I read one of two more but that had been a while, so when I saw this at the library I got it, and enjoyed the heck out of it. I don’t know my way around England, other than what I might have picked up from a mystery novel now and then, and I admit a better map in this book would have helped, but what the heck. This was fun.