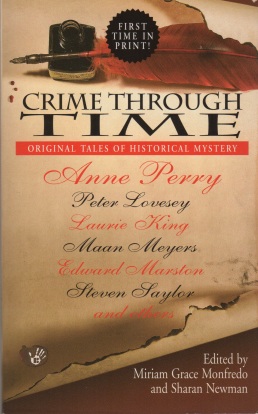 I have been reading a few historical mysteries and this seemed like just the ticket to discover new authors and to read a little by the names I knew. This collection contains twenty one stories by an impressive list of authors.

The collection is arranged in chronological order and begins with Lynda S. Robinson’s “Death of a Place-Seeker, featuring Lord Meren, the protagonist of her novels set in Egypt. If you haven’t had the pleasure of reading any of these [Murder in the Place of Anubis, Murder at God’s Gate, Murder at the Feast of Rejoicing and others, or if you have wondered if you would like them, this short story will give you an idea of the character and atmosphere of these enjoyable books. That’s the nice thing about ALL of the stories in this collection, they give an excellent introduction to these authors and their works. I won’t go on at length about each story, but I will list some of the authors: Steven Saylor (Rome), Sharan Newman (1142 France,), Edward Marston (Elizabethan England), Leonard Tourney (Elizabethan England – I particularly liked this one),  Edward Hoch (1920 England), Peter Lovesey (1860 England), Laurie King (1918 England), Troy Soos (1894 Baltimore), Anne Perry (188? England, another real goodie), Barbara Paul (1917 New York), Michael Pearce (early 1900’s Cairo), Ken Kuhlken (1941 San Diego) and several others.

There was only one story of all these that I didn’t particularly like (I won’t tell you, perhaps you’ll guess when you read the engrossing collection). This will give you a great look at many top historical mystery authors and may turn you into a fan of the subgenre. If you’re already a fan, this will be a real treat!

7 Responses to FFB: Crime Through Time edited by Monfredo & Newman