Murder At the Old Vicarage by Jill McGown – I liked the first couple of the Lloyd and Hill detective stories I read, the first two in the series, and this seemed like a good one to try next. However, I found it to be over-plotted and over-charactered. There were several very obvious red herrings, (pink herrings?) which didn’t fool me and slowed things down considerably. The most interesting aspect of the series, at least in the books I’ve read, is the Lloyd-Hill relationship, which stuttered along here and remains unresolved, I’d give this one a “just okay”. 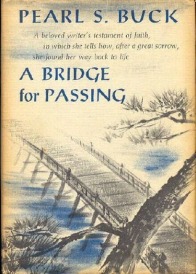 A Bridge for Passing by Pearl Buck – This is the autobiographical story of the filming, in Japan, of Buck’s novel The Big Wave. But it’s also a meditation of sorts on the difficulty she had accepting the death of her husband during the same time, and her struggles to focus on the film when she needed to. I enjoyed this a lot, and will now read the book the film – one I’ve never seen – was based on.

Bossypants by Tina Fey – Fey has a certain kind of humor, and you either like it or don’t, not much middle ground. Since I liked almost all of her work for Saturday Night Live, both as writer and on camera, I decided to try this when I spotted it at the library. I’d rate it “pretty good”.

So, what have YOU been reading lately?