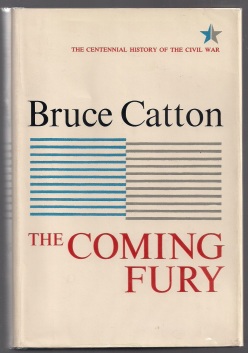 The Coming Fury – Centennial History of the Civil War, Volume I, by Bruce Catton, Doubleday hardcover (1961) 565 pages – Winner of both the Pulitzer Prize and the National Book Award.

In light of a new documentary by Ken Burns on Viet Nam coming this Fall, we were talking about his many other fine documentaries. We decided we wanted to watch The Civil War again, and got it from the library. It’s on 6 DVDs, and we watched it over a couple of weeks. We’d forgotten a lot of the content and details, and we thoroughly enjoyed it.

I then decided I wanted to read more and was going to read Shelby Foote’s The Civil War, A Narritive in three volumes. However I remembered I had the Centennial History of the Civil War, by Bruce Catton, also in three volumes, on the shelf, unread for more than forty years. So this, the first volume, is what I decided to read.

The Coming Fury describes the event and forces leading up to secession, as well as the beginnings of the combat, and then leading to failure of political processes from Ft. Sumptor to Bull Run, and those battles. Though Ft. Sumpter wasn’t really a battle, just the marking point of the beginning of armed hostilities.

Yes, this is somewhat dated compared to the Foote trilogy, which has a more modern tone. But it’s also less oriented toward a every-sentence-everyone-said-counts approach. I found it quite readable and sufficiently detailed. Note that the first shot at Ft. Sumpter is described on page 313, so much has gone on before that April morning.

Catton was and is a superb historian, as he seemed so many decades ago. A fine piece of scholarship neatly presented. If you’d like to learn more about the Civil War, perhaps the defining time of our nation, this isn’t a bad place to start. After a break for some other reading, I’ll come back for the second volume, The Terrible Swift Sword.

Enjoying life in Portland, OR
View all posts by Richard Robinson →
This entry was posted in Books & Reading, Non-fiction. Bookmark the permalink.

8 Responses to Friday Forgotten: The Coming Fury by Bruce Catton