Friday review: Sidney Chambers and The Shadow of Death by James Runcie

Sidney Chambers and the Shadow of Death by James Runcie, Bloomsbury Publishing 2012 trade paperback, the first volume in the series of The Grantchester Mysteries 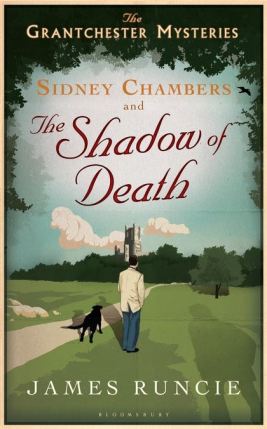 I first became aware of this author, book, and series through an article in Mystery Scene magazine, and then borrowed the book from the library.

The Grantchester Mysteries is a series of books by British author James Runcie, set during the 1950s in Grantchester, a village near Cambridge in England. The books feature the clergyman-detective Canon Sidney Chambers.

Sidney Chambers and the Shadow of Death, is comprised of six short standalone mysteries. This is a short story collection in all but name. The “stories” are just chapters, but each is a separate story. However there is no table of contents showing them and no separate title for each.

The first chapter/story is about a suicide that has a close friend certain it must have been murder. The vicar, Canon Sidney Chambers, decides to poke about and uncovers some interesting discrepancies. The second story involves a missing engagement ring, one that disappeared during a New Years Eve celebration in the home of a popular MP.

I won’t go through all of them, but I think you get the idea. The are gentle, character-driven mysteries with a solution solvable by the man who is able to ask questions and get to the bottom of things. You wouldn’t be far off the mark if you thought of Aird, Allingham or Christie short stories but without the golden age twists in the plot. I was also reminded, in some cases, of the stories of H.R.F. Keating

I enjoyed the book. The character is appealing, I liked the reference to jazz, an important element in one of the stories, and the portrayl of village life. Though it’s a bit lighter than my usual fare, this went quickly and was a nice diversion.

The books were turned in the ITV detective drama Grantchester in the same time and setting  as the books. They feature Anglican vicar Sidney Chambers (James Norton), who develops a sideline in sleuthing with the help of Detective Inspector Geordie Keating (Robson Green). The first series was based on the six stories from the first book, Sidney Chambers and the Shadow of Death. A second series was commissioned in late 2014 and broadcast in March and April 2016 and a third series is airing in 2017.

I’ve seen Season 1 and enjoyed it quite a bit. We’re watching Season 2 now.

The books in the series include:

A total of six books are planned. The series was inspired by James Runcie’s father, the former Archbishop of Canterbury, Robert Runcie.

note: Some of the foregoing information was found on Wikipedia.

Enjoying life in Portland, OR
View all posts by Rick Robinson →
This entry was posted in Books & Reading, Mystery, Short Stories. Bookmark the permalink.

12 Responses to Friday review: Sidney Chambers and The Shadow of Death by James Runcie