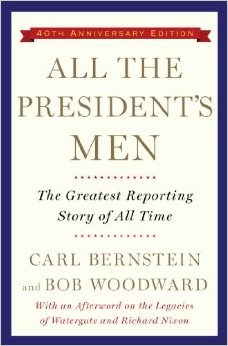 The weather has been nice, the garden looks great, things are fine. I haven’t done a lot of reading, but I finished Orbital Decay by Allen Steele, and liked it better at the end than at the middle point, which does happen sometimes with books. I read Paul Hollywood, a biography by Andrew Dagnell. It’s one of the worst biographies I’ve ever read. Slim on facts, oozing with stories from British scandal sheets and full of repeated information, this one is so bad it went directly into the recycle bin.

Vastly better, of course, is All the President’s Men by Carl Bernstein and Bob Woodward. I bought and read this in 1974 when the hardcover was published, but considering events in Washington D.C. these last months I wanted to reread it. I couldn’t find my copy (buried in a box somewhere here) so I got this 40th anniversary edition from the library.

The uncovering of the Watergate scandals. I’d forgotten a lot of the details, but it’s in essence as I remembered, and reading the book brought back to mind the time Watergate and all the fallout was happening. I lived through it, remember reading the newspaper articles, seeing the news, later taking days off work to watch the hearings. Of course I’ve seen the film more than once, but it edits so much out to fit a time frame.

I also have a hold for The Final Days which is the follow-up and should have it from the library in a week or two.

She’s going to read All the President’s Men next, though she wasn’t as caught up in Watergate as I was, so we’ll see if all the detail is fascinating, as I found it, or overwhelming.

Enjoying life in Portland, OR
View all posts by Richard Robinson →
This entry was posted in current reading, Mystery, Non-fiction. Bookmark the permalink.