Forgotten Book: All the King’s Men by Robert Penn Warren 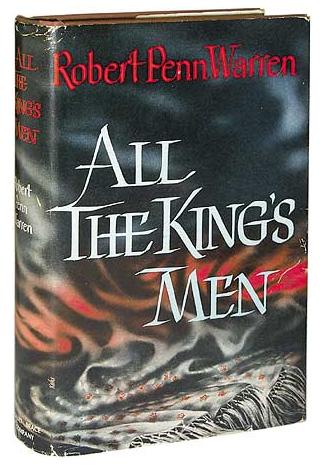 All the King’s Men portrays the dramatic political rise and governorship of Willie Stark, a cynical populist in the American South during the 1930s. The novel is narrated by Jack Burden, a political reporter who comes to work as Governor Stark’s right-hand man.

A word on the writing style is in order. The first paragraph goes on to the second page, and the descriptive power of it grabs the reader immediately. By today’s standards, it’s what I might call heavy, and there are words in it, ones in common use in the American south at the time, that some readers of the squeamish variety might find offensive. It’s all part of the setting.

The trajectory of Stark’s career is interwoven with Jack Burden’s life story and philosophical reflections:

Though Stark is a gubernatorial candidate, and has a history in politics, there are enough echoes of the book in current events that I couldn’t resist putting it up as this Friday Forgotten Book. Yes, this was published a long time ago, but it’s worth reading now, and I think in many ways it’s held up pretty well.

The character of Willie Stark is a bully, with an over the top ego. He’s cruel, taunts the handicapped, is greedy and seeks ever more power. The newspaper man Jack Burden (a journalist/media reporter, we’d say today) starts out as an observer, but becomes a “right hand man”, caught up in the political circus. Various events pull him away, and the book ends up being his. There are a lot of undercurrents, themes of religious belief, loneliness, the cruelty of power and the helplessness of weakness and poverty, but above all is Stark, riding roughshod over every person and obstacle.

Enjoying life in Portland, OR
View all posts by Richard Robinson →
This entry was posted in Books & Reading, Fiction, Friday Forgotten Books. Bookmark the permalink.

18 Responses to Forgotten Book: All the King’s Men by Robert Penn Warren