Posted on December 8, 2016 by Richard Robinson 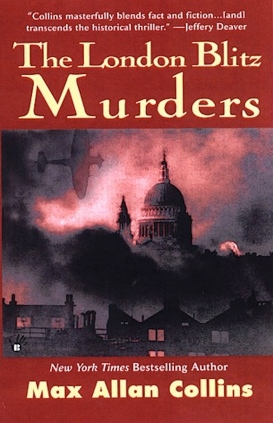 The events in this book take place in February 1942, during a lull in the devastating blitz and is a fictionalized account of the “Blackout Ripper” case. As is typical of Collin’s books, there are historical figures doing the detecting, in this case Detective Chief Inspector Edward “Ted” Greeno of the CID and pathologist Sir Bernard Spilsbury. Added to the cast is Agatha Christie Mallowan, who in fact did work in the dispensary at University College Hospital in London, Spilsbury’s medical base of operations.

Collins has attempted to write a Christie-style story about a true crime serial killer, and has done a surprisingly good job of it. The story is nicely told, the characters interact believably, and, though there is little doubt about who is committing the crimes, we see the crime-solving process, with Christie Mallowan participating and adding her intuition to what is otherwise a typical police investigation. A light, enjoyable book.

An event in the book is the theatrical opening of Christie’s Ten Little Indians including comments on her writing a different ending for the play from the book. It was enough to prompt me to take out my copy of The Mousetrap and Other Plays and re-read the play, having recently watched the film version And Then There Were None [the 1945 version, produced by Popular Pictures, released by 2oth Century Fox, premiered October 31, 1945, starring Barry Fitzgerald, Walter Huston, June Duprez, Louis Hayward, Ronald Young, Judith Anderson, produced by Rebe Clair. It’s my favorite version.