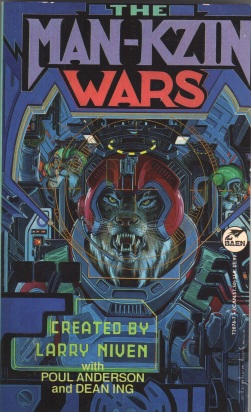 This is the first book in the franchise portion of Niven’s Known Space universe. It opens with his short story “The Warriors” and that’s followed by two novellas, “Iron” by Poul Anderson and “Cathouse” by Dean Ing. All are enjoyable, Niven’s is the least of the 3.

The Kzin are a feline, catlike race that man encounters quite a while after moving into space, though before managing to create a Faster Than Light drive (it’s called hyperdrive in these books).

The Kzin are unrelentingly warlike though bound by a code of honor. Each story tells of an encounter between the two species, Man and Kzin, and it’s outcome which in all instances in these three stories is a matter of intellect overcoming brawn. That doesn’t necessarily mean the humans always win.

The series of Man-Kzin stories now stretches to 14 volumes plus a novel. Some of these are collected in omnibus volumes. These are really enjoyable slightly old fashioned science fiction, especially for those who don’t want a lot of grimdark, nasty or “literary SF” reading. The paperbacks are easy to find, fun to read. Start at the beginning for the best understanding of the two races/species involved and the progression of the conflict between them.

Enjoying life in Portland, OR
View all posts by Rick Robinson →
This entry was posted in Friday Forgotten Books, Science Fiction. Bookmark the permalink.