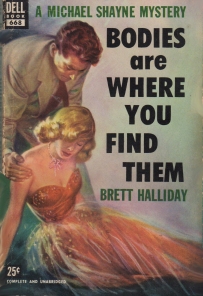 Shayne and his wife are about to leave on a trip to New York when the phone rings. You know already it will be bad news, and it is. A woman is on her way to Shayne’s office with important information about a crooked candidate for Mayor, and the election is only two days away.

The woman arrives, but she’s been doped and Shayne leaves her in his office while he takes his wife to the train station and see’s her off to New York (thus allowing the author to clear her out of the story).

When Shayne returns to his office, the woman is there, but she’s been strangled. Thus begins a frame-up that keeps on getting worse, as Mike Shayne fights crooked politicians, gangsters, his nemesis Chief of Detectives Peter Painter and the clock.

He must find the murderer, clear his own name and all before the voters go to the polls, or the crooked politician will win the election and Shayne will go to prison for murder one.

With the tight time frame, cast of characters, some of whom Shayne readers have seen in previous books, and the serious threat to Shayne’s freedom, he needs all the help he can get, and finds it in the person of his reporter friend Timothy Rourke. The iron’s in the fire in this one, and when things begin to overheat, it’s all Shayne can do to solve the case.

Enjoying life in Portland, OR
View all posts by Rick Robinson →
This entry was posted in Friday Forgotten Books, Mystery and tagged Mike Shayne. Bookmark the permalink.