Posted on September 30, 2016 by Richard Robinson 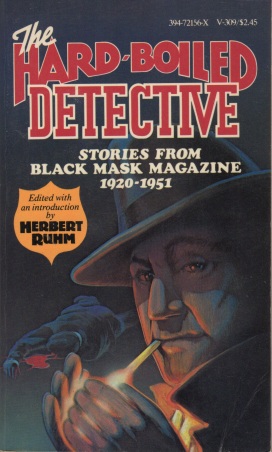 It should come as no surprise that an anthology of hard-bolied stories would be sourced from Black Mask Magazine, the pulp monthly published from 1920 to 1951. It’s the pulp that launched many stars of the genre, including Raymond Chandler, Dashiell Hammett and Erle Stanley Gardner. This 1977 anthology collects thirteen very good stories, some of them reprinted here (though subsequently reprinted, more than once) for the first time since their initial appearance.

Although you may be able to find all of these stories elsewhere, this is a nice little anthology for reading, or re-reading, some great stories. Some of these, such as “Take It and Like It”, “Goldfish” and “The Gutting og Couffignal” are well worth reading – but then the entire book is – again, if it’s been a while. For the reader coming to these for the first time, I envy you.

That’s a hell of a line up!