Posted on September 1, 2016 by Richard Robinson 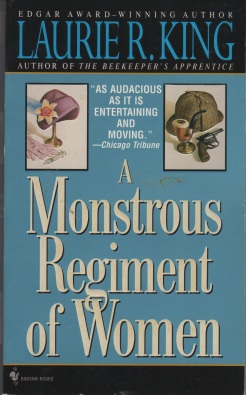 I very much enjoyed the first in this series, The Beekeeper’s Apprentice, which I read in March 1997. I see from my read list I gave it a rating of “excellent” (4.5 of 5 stars) and when I reviewed it in The Perp, saying I liked the book a lot and gave it a “highly recommended”.

At the time I bought the next three books in the series, available in paperback. Why I didn’t read another until a couple of years later had to do, as is so often the case, with the number of books in the TBR pile and my own idiosyncrasies of what appeals at any particular moment. I plucked this from the shelf a couple months ago, read about 30 pages, then left it in the car, and every now and then I’d pick it up and read a few pages, perhaps while at the pool or in the car waiting for someone. But the book grabbed me and I decided to finish it, which I did in a couple of days. I wrote this review and then that got set aside until now.

A series of murders claims members of a church/suffrage organization’s wealthy young female volunteers, and Mary Russell, with Holmes in the background, investigates, little knowing what danger she personally faces. Mary has come into her majority and so has the means to match her intellect and skills in determining the truth behind the murders and a near-fatal accident.

I don’t think this is as good as the initial book, but that’s my reaction comparing the plots, I like the writing in both. I know people who liked this one better. There’s certainly nothing wrong with this one at all, I just didn’t happen to like it as much The Beekeeper’s Apprentice. Since the time I read this, I’ve gone on in the series by several more books. There hasn’t been one I didn’t like. However I’m several books behind in this series, so I can’t speak for all of them.

14 Responses to Forgotten Book: A Monstrous Regiment of Women by Laurie R. King