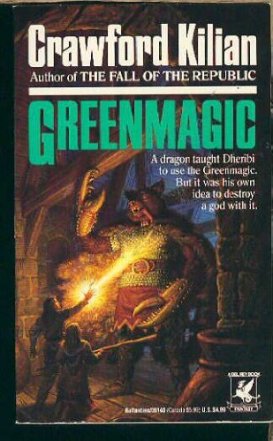 Dheribi is the son of a concubine slave, loved by his father the king but jealously hated by the queen and her son, the rightful heir. What is not known to any is that Dheribi’s mother is a sorceress able to use the earth magic (known as Green Magic) of her people.

A noble’s son is about to rape a serving girl when Dheribi interferes and in the ensuing fight the son is killed. The King has no choice but to treat him as any other slave who has committed such a crime, though he has Dheribi flogged and sold to a slave dealer rather than killed.

Unknown to any but Dheribi and the King the true plan is that Dheribi is to be a spy in the neighboring city state, then report back about defenses prior to a war of conquest. However events – and the discovery that he too can wield magic – interfere with the plan. Dheribi’s innate ability in the magic arts is so great that he is able to change the course of events. The more he learns, the more he realizes there is much he still needs to understand before he can free his mother and heal the land torn by the fire magic of an entity which has virtually become a god. An enjoyable fantasy novel.

There is a 1995 sequel, Redmagic published by Del Rey.

A Word About Maps – Readers of fantasy know the value of good maps in a book set in an invented world. If we’re lucky we get one in the front of the book. These aren’t always very well drawn, clear or inclusive. This book has some of the better maps I’ve seen, one in the front and three others at the beginning of later chapters giving a closer look at the locale therein. Bravo!