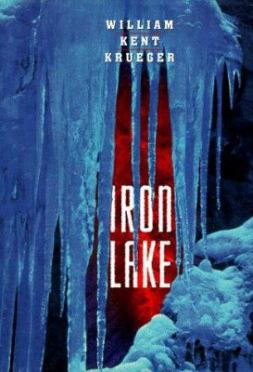 I was at George Easter’s presentation of Barry Awards at the 1999 Milwaukee Bouchercon, at which this won best first novel. I bought the paperback and put it on the TBR pile, and I read it a few months later, when it worked it’s way to the top. What a pleasure.

Part Irish, part Anishinaabe Indian, Cork O’Conner was once Sheriff of Aurora, Minnesota but was recalled after a shooting in which circumstances were against him. He didn’t fight the recall because he didn’t have the heart to.

Now estranged from his wife and family, he lives in and runs a seasonal burger stand on the shore of Iron Lake. When the county judge is murdered, Cork is caught up in the investigation which eventually leads him to the murderer, and some bitter facts.

This is the beginning of the excellent series, and if you haven’t read this and the books that follow it you’ve missed a real treat.

The book got quite a bit of praise at the time, and deservedly so. I’m impressed by the skill with which Kruger paints the characters and landscape, as well as his storytelling. This is a good one, and the series gets even better as it progresses. Read these in order to follow the lives and changes the characters go through!

Very good, highly recommended. The latest Cork O’Conner novel, Manitou Canyon, will be out in September.