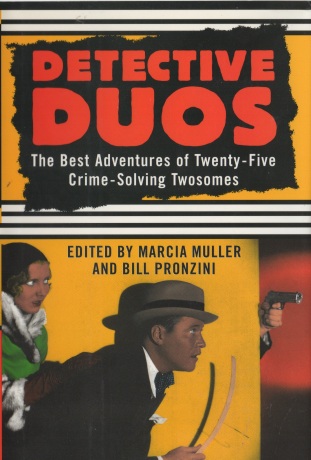 “Fictional characters who work together in one capacity or another to solve a mystery have been a staple of the crime-fiction genre since Edgar Allan Poe wrote the first detective story in the early 1840s.”
– from the introduction

I found this, as a remainder I think, a few years ago. I was familiar with most but not all of the authors and made a nice discovery or two while reading authors whose other books I’ll pursue.

I’d read about two-thirds of these stories, maybe more, but that didn’t diminish my pleasure in revisiting them. Of the authors or characters new to me, I particularly liked the Withers & Malone story “Once Upon A Train”, the Father Shanley & Sammy Golden story “And Start with a Blonde” by Jack Webb and most of all Michael Gilbert’s “The Road to Damascus” with Mr. Calder and Mr. Behrens. I’ve found a copy of Mr. Calder and Mr. Behrens and, later a nice copy of Game Without Rules, the 1967 collection of stories featuring them.

The quality of the stories here varies depending on the skill of the author in using the short story form. They’re mostly very good, all are interesting. The introductory essay preceding each story gives a good summary of the author’s work as a whole, not just those works which feature the duo in the story. Especially valuable is the long introduction to the book.

17 Responses to FFB: Detective Duos by Pronzini and Muller