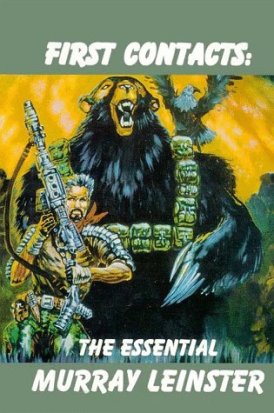 I first encountered Leinster’s writing in Astounding Science Fiction. I think it may have been a Med Series story and one of those is to be found here. The stories are in chronological order beginning with stories published in the last thirties. That was long before I began reading Astounding so the early stories were new to me. This collection does a good job of covering Leinster’s career, ending with two previously unpublished works.

While Leinster is clever and many of the stories explore the mercurial aspect of human nature, his outlook is pretty paranoid in many of these stories, there’s always the worst case scenario to be dealt with. The premise of one of his best known stories, “First Contact”, is that when alien races meet in space they must inevitably attempt to destroy each other since neither can trust the other to have peaceful intentions and can therefore not be allowed to know where the home system is. Well, okay, all things considered, maybe that makes sense.

The last of the previously published stories is “Exploration Team” and I well remember the striking cover for it on Astounding with the blue-and-orange Sphexes and the Kodiak bears. It’s a shame they couldn’t use that image on the cover of this collection. The story was as good as I remembered, I wish he’d written it as a novel. Another solid collection from NESFA, this is recommended for readers of “old” sci-fi.