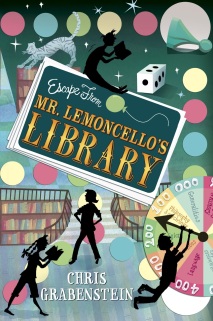 slow motion here. A few warmer, sunny days got us outside, then the NCAA Mens Basketball Tournament took four days of what would have been reading time. That’s okay, it’s only once a year and I enjoy it. But little reading has happened.

Last week I said I was starting Mort(e) by Robert Repino. I read some of it but couldn’t get interested. The writing was flat enough that, for me, it got in the way of the story. So back to the library it goes. Instead I read another library book, Escape From Mr. Lenoncello’s Library by Chris Grabenstein which, on a whim, I’d decided to try. It’s fun, kind of goofy. As it’s aimed at a young audience, goofy is perfectly okay. I liked the puzzle aspect.

Barbara is about half done with Henning Mankill’s Sidetracked, the book she’d just started last week. She has some things waiting at the library on her “for later” shelf, but hasn’t decided which to read next.