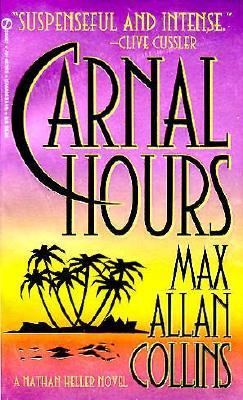 “The low-flying seaplane made a shimmering mosaic of the tropical waters beneath: blue turning bluer, then graying, even whitening over coral or sand. Islands, tiny, scraggly, apparently unpopulated keys dabbed the sea with more color like a bold impressionist painter.”

A few years ago, this was the first book by Collins I read. I had several on the shelf, and I plucked this one at random from among them. Neither the title nor the color of the spine influenced my choice, it was a blind grab. From what I’d heard of the Nate Heller books, there’s no reason to read them in any particular order, so what the heck.

This one takes place in the Bahamas in 1943, putting Heller in the role of private investigator looking into the murder of Sir Harry Oakes. Heller has been hired by Oakes to get the dirt on his daughter’s husband whom Oakes believes is philandering. But soon Oakes is killed, the son-in-law arrested for the crime and Heller is asked by Sir Harry’s daughter to exonerate her husband. As Heller tries to put the facts together he runs into political interference by influential persons from the Duke of Windsor to the Attorney General. He must deal with two Miami cops, brought in to handle the case, who are bent and connected. During his investigations Heller is pursued and made love to by several women, some of it ardently described. It didn’t add much to the novel for me. By the way, the title comes from the native Bahaman term for the hours between sunset and sunrise.

Based on facts, a fictionalization of real events, with real people populating the book (Earle Stanley Gardner, Ian Fleming, the above mentioned Duke of Windsor) the book beckoned to many tastes. I wasn’t familiar with the actual Oakes case so I had no problem with anything Collins presented here. The locale was adequately – if perhaps a bit tritely – described, the events happened in logical, understandable sequence, the characters seemed pretty well portrayed.

Collins gave us chapter and verse about what happened to all the major players from the end of the case to “present day”, which is, or was when this was written, typical of a Heller novel, and I like it. However, it could have been done an Afterword and let the novel end in the more logical place. Still the book was entertaining and the characters, especially Heller, nicely drawn. I kept turning the pages and will read another soon.