FFB: From Doon With Death by Ruth Rendell 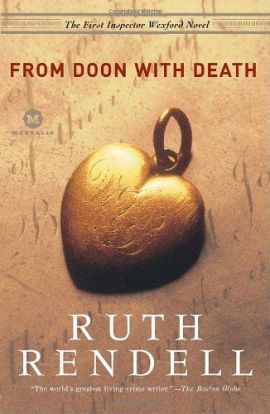 I thought: Ruth Rendell. Sure, I have something here by her.

I didn’t, and didn’t even know the identity of her series character. I do now, and I’m the better for it. This is the first book in the series, so I was introduced to the character as well as the time, setting and nature of it’s inhabitants. Rendell is often labeled a thriller writer, but the book I read, her first published, seems to be a pretty straight-forward British police procedural.

The story: Margaret Parsons is a plain housewife in a plain house with a plain relationship with both her husband and life in general. All a bit dreary, really. Then her husband comes home to an empty house, and after a few hours reports his wife missing. Two days later, she’s found and a murder investigation begins. Old school chums are involved, as is Arctic Sable lipstick. I won’t say more.

There are characters and personalities galore, that’s the real strength of this novel, though as a mystery reader I was pretty well able to spot the phonies from the rest. I don’t think Rendell was quite as concerned with fooling the readers as stimulating them.

An aside: It’s occurred to me, perhaps unfairly, that sometimes I could be reading a British mystery and feel a sameness to other British mysteries I’ve read. Is it by Peter Robinson, or Ruth Rendell, or Robert Barnard or Ian Rankin or…? There just seems to be a “feel” (that’s a technical term) that, to me, is very similar. Perhaps it the soot-streaked stone, the grey skies and the general dreariness of the setting. This isn’t across the board, of course, I’d never confuse Peter Lovesey with Val McDermid.

But back to the book. I liked it. Wexford is a character I’d like to get to know better, and that will happen when I get a copy of A New Lease of Death (1967) (U.S. title: Sins of the Fathers)

16 Responses to FFB: From Doon With Death by Ruth Rendell