Posted on December 10, 2015 by Richard Robinson 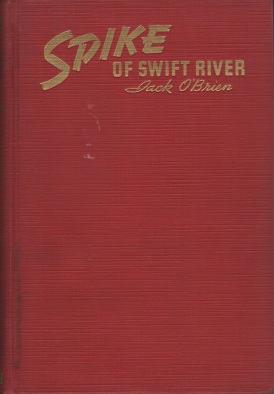 “Pounding out of Pendleton four minutes behind scheduled running time, Number Six, eastbound special, swayed and rocked into the night. The roar of the giant engine shattered the silences as the dazzling white beam of the headlight stabbed through the darkness like a searching finger. Smoke, blacker than the night itself, belched from the stubby smokestack to swirl back in tattered wisps around the ten lurching express cars which made up the train.”

Clinging to one of the cars is Dan Kirk, catching a ride east, struggling with anger and despair, and struggling to hang on as the train rocked along. But he’s discovered by a Rail Bull and tossed off the train as it slows to take on water near the small logging town of Swift River. Tired, sick, beat up, with a bad knee, Dan is barely able, long after the train has left, to hobble to the water tank, get a drink from a tap, and collapse beside a rail shack, almost immediately asleep. While he slumbers, a dog limps out of the forest edge, also takes a drink from the muddy pool beneath the tank and, unaware of the man, curls up on another side of the shack, to lick and worry at his injured paw. 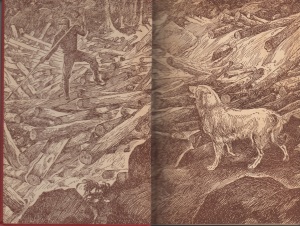 Thus we meet Dan and Spike, man and dog, and this book is their tale, and quite a story it is.

I got this book in the mid-Seventies at a dog show at a local community college. A friend had entered a dog in the agility competition, and I went to watch. Adjacent to the grassy field the dogs were on, were several booths. In one was a book seller with lot of dog books, including many dog fiction novels and stories. I bought a few, having enjoyed such books as a boy. This has been in a box or on a shelf ever since, and I’ve just now read it.

The hero of the book is Spike, a Shepard mix, but Dan is really the protagonist, and it’s the “legal theft” of his father’s timber company that left Dan penniless and riding the rails. Now, in Swift River, Dan is given a chance to get back on his feet, and with Spike at his side he overcomes being the new guy, sub-zero weather and bad guys to win out against the odds.

I enjoyed this book a lot. It’s darn well written for what at the time would have been “a boy’s dog book” (though girls read them too, of course). O’Brien wrote a few more of these, and if I come across any I’ll snap them up.

Enjoying life in Portland, OR
View all posts by Richard Robinson →
This entry was posted in Adventure, Books & Reading, Fiction. Bookmark the permalink.