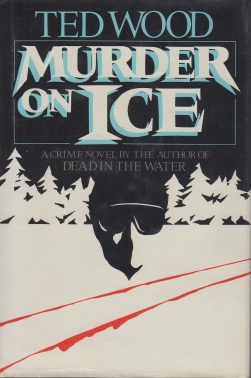 “A kid in a mackinaw jacket stumbled out of the fire door of the Lakeside Tavern and collapsed against the six-foot snowdrift under the emergency light. I watched from the police car as he rolled onto one elbow and pried himself erect, one hand cupped over his mouth. Blood oozed between his fingers, black in the yellow light.”

I like this series of books by Ted Wood, especially the first four or five. I picked this one to read because of the winter setting, just right for this time of year.

Reid Bennett is the one man (plus dog) police force for Murphy’s Harbor, a small town on a lake in Ontario, Canada. The first book in the series introduces him, tells of his background as a Marine in Viet Nam, his taking the job at Murphy’s Harbor and his first important case. It’s a good book, and I recommend it. This, the second in the series, follows up, and while that took place in Summer, now it’s a bitter Winter. The town, in an effort to pull some off=season tourists to the area is having a Winter Carnival, and part of that is a beauty contest. A blizzard has settled in, but the people are happy in the Legion Hall, and everything is fine until the beauty contest winner, disappears. There one minute, then the lights go off, and she’s gone the next, when the power is restored.

At first it looks like a group called C.L.A.W (Canadian League of Angry Women) is responsible, but it also looks as if it’s just a publicity stunt and the girl will reappear the next day to fanfare and publicity for the feminist, anti-chauvinist group. Still, policeman Reid Bennett has to go find the girl, in the icy storm, 2 or 3 inches and hour falling, wind whipping. But the girl was taken out to the main highway, which had been plowed, and could be anywhere. Checking a motel not far away, Bennett finds the group, girl and “kidnappers” had been there. He finds the girls is willing and part of the disappearance, and he finds a dead woman in the room the group had rented before they left after a couple of hours.

The girl’s father is head of a company which makes missile guidance systems, and soon we find he, and probably his daughter, are the target of a “political action committee” calling itself The People’s Revolutionary Guard. The PRG are ruthless, and before long another body is found and the action escalates.

I’ll not say more, except that Bennett, on a snowmobile, is constantly on the chase, trying to close in on murderers in what at first seemed only a feminist publicity prank, now turned very deadly indeed.

Let’s get this out of the way: this is a very good book, but it’s dated in some of it’s characterizations, motives and viewpoints. The portrayal of a militant feminist group is very Eighties, as is the set up of an anti-war political action group. Things were that way then, and when it was written it made perfect sense. It’s a case of written in it’s time, of it’s time.

I enjoyed re-reading this enough that I’ll re-read another or several of these before I move on to other books. Good stuff.