Forgotten Book: Over Her Dear Body by Richard Prather

Posted on November 6, 2015 by Richard Robinson 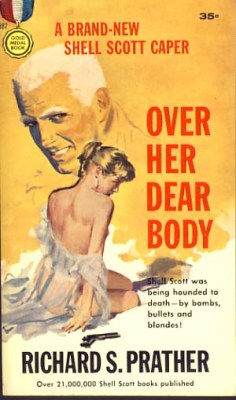 “Behind me on the yacht, gayety swirled like audible confetti. I leaned on the rail up near the bow, smoking a cigarette and finishing another bourbon-and-water, waiting for something to happen.”

In the first few pages while he’s waiting for his client to make herself known, Scott has boarded a yacht, had some drinks, a woman has made a pass at him. When she does she’s drop dead beautiful – of course – and invites him to a stateroom to speak privately.

He goes into the wrong room, interrupting a meeting of some sort, ends up in a fistfight, goes to the correct stateroom but the woman has left. We soon learn Scott’s client’s brother is up to something shady and the day after the party on the yacht he’s killed. 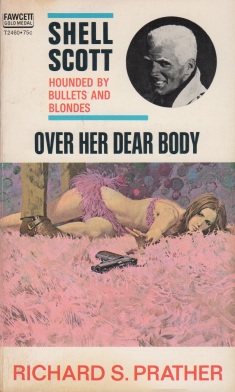 Thus begins a slightly convoluted story in which everyone seems to want to kill Scott, while the cops don’t believe anything he has to say. It seems the State Highway Commissioner is having people buy land that new freeways will cross. Apparently there is a lot of profit to be made. The meeting Scott stumbled into was between the Commissioner, the (soon to be murdered) brother and a couple of hoods. All attempts to kill Scott fail though the pressure increases. He foils a car bomb attempt, gets shot, escapes from a hospital as killers close in and finally manages a showdown with the bad guys that solves everything.

There are babes and action and even a little humor. Scott gets roughed up pretty badly, more than usual. I like these a lot and this one was fun.

Enjoying life in Portland, OR
View all posts by Richard Robinson →
This entry was posted in Friday Forgotten Books, Mystery and tagged Richard Prather, Shell Scott. Bookmark the permalink.

17 Responses to Forgotten Book: Over Her Dear Body by Richard Prather