Posted on November 1, 2015 by Richard Robinson 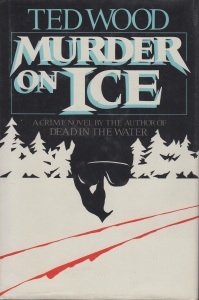 Looking ahead to the November 21 special Friday Forgotten Book on the theme of Winter / Holiday, I decided to read a book for that. I started off with Patricia Hall’s The Dead of Winter, which I liked well enough but got confused. I hadn’t read the previous books in the series and thus didn’t understand references to past events, people or places, which had a lot to do with motive. I felt lost enough times I gave it up two-thirds in.

Much better was Murder On Ice by Ted Wood, which takes place in the dead of Winter in small Murphy’s Harbor, Ontario, Canada. It’s the second in the series featuring Reid Bennett, one-man police department of the town. I’d read the book a couple of times before, and enjoyed it just as much this time. Review later this month.

Finally, I read Wycliffe and the Quiet Virgin by W.J. Burley, which takes place during the two days before, on, and three days after Christmas. This is the first Wycliffe novel I’ve read, and I enjoyed it quite a bit, both writing and character. It’s the one I’ll probably review for that FFB, and so won’t say more here.

Barbara finished The Killing Lessons by Saul Black which she liked though it was pretty grim. She also finished The Oregon Trail, an American Journey and she enjoyed it. It’s slow going, with tremendous detail, as is to be expected in such a book. Well worth reading.

Now she’s just started reading The Girl In the Spider’s Web by David Lagercrantz, which is, for any who don’t know, a continuation of the story of the abrasive yet beloved Lisbeth Salander, created by the late Stieg Larsson in the original “Millennium” trilogy, beginning with The Girl with the Dragon Tattoo. Barbara liked those books and is looking forward to this one.

How about you?
Have you read these books or authors?
What are you reading?