This seemed like a fitting Friday Forgotten Book for today, since I re-read The Hound of the Baskervilles just over a week ago. How “forgotten” this is, as opposed to, perhaps, seldom read, I’m unsure. 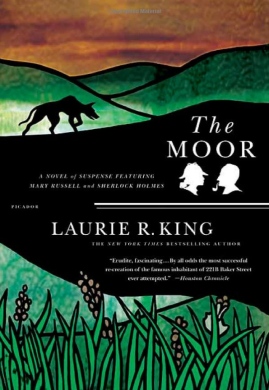 Holmes summons Russell from Oxford with a telegram stating simply “I need you.” She is needed at Dartmoor, for there has been a murder which has greatly upset Reverend Sabine Baring-Gould and Holmes has been called in to solve it. So we return to the scene of The Hound of the Baskervilles and King does a good job of describing the moor landscape and inhabitants as small hints of motive surface and slide away. A second murder and several seemingly unconnected events begin to form a pattern, causing both Holmes and Russell to tramp the wet, cold, muddy moor in search of information and clues.

Very moody and with a strong sense of place:

“Up a rise and down the other side, across a rivulet with sharply cut sides and a scurry of clear, peat-stained water in the bottom. Up again, avoiding a piece of granite the size of a bathtub thrusting out of the rough grass. A meandering ridge on the approaching hill, resembling the work of some huge, prehistoric mole, became on closer examination an ancient stone wall nearly subsumed by the slow encroachment of turf. A distant sweep of russet across a hillside, a scurf of furze and dying bracken fern was cut by the dark of another ancient wall drawn along it’s side.

It was, I supposed, picturesque enough, given the limited palette of drab colors, but as a piece of Impressionist art it served to evoke only the disagreeable feelings of restlessness, melancholia, and a faint thread of menace.”

Though the plot is slightly weaker here than in the previous book, A Letter of Mary, the writing is better. This is particularly enjoyable for the characters, mood and location. If you haven’t read this series, or haven’t gotten this far, I recommend you give them a try. Starting out, you’ll want to read them in series order, of course, beginning with The Beekeeper’s Apprentice.