ffb: Death and the Dutch Uncle 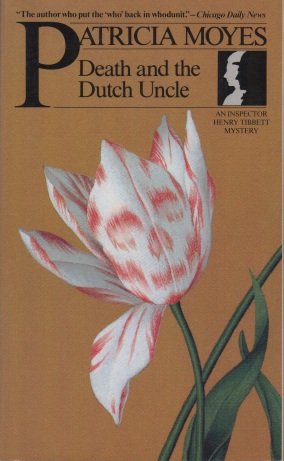 Imagine my surprise and delight when looking for something else on a bookshelf I happened upon this paperback.  It was – horrors – shelved in the wrong place. Moyes has long been a favorite author and I realized I hadn’t read this one.

Initially published in 1968, this is the eighth book in the series of mysteries featuring Henry and Emmy Tibbett. In this one, Henry has recently been promoted from Inspector to Superintendent Tibbett.

A small-time crook has been shot in a pub and as he lays dying in the hospital he mumbles “One forty-five, one forty-five” again and again. Since he has a reputation as a fancier of horse racing it’s assumed this is a reference to the 1:45 race at the racecourse. A seemingly unrelated pair of accidents has made Gordon Trapp, brother of a prior acquaintance of the Tibbets, suspicious and he invites himself to dinner at their home to discuss his concerns, which hinge on a vote soon to be taken by an international board which adjudicates frontier disputes between countries.

In this case the dispute is between a pair of recently independent African nations. As it turns out the accidents are murders, the crimes are related and soon Tibbett is deep into an international plot and on his way to Holland with his wife Emmy.

Strong characterization, twisty plots, solid police procedural elements and exciting conclusions are the things that make me enjoy Moyes books so much. Another very enjoyable mystery by Patricia Moyes.

Enjoying life in Portland, OR
View all posts by Rick Robinson →
This entry was posted in Friday Forgotten Books, Mystery and tagged Patricia Moyes. Bookmark the permalink.

6 Responses to ffb: Death and the Dutch Uncle