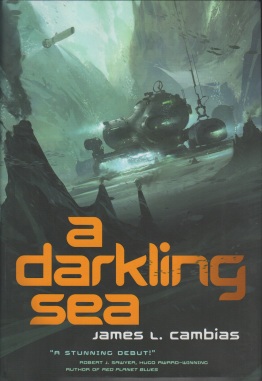 “By the end of his second month at Hitode Station, Rob Freeman had already come up with 85 ways to murder Henri Kerlerec.”

I loved this. The world building is top notch, the characters well drawn, the story pulled me right along.

Humans are on the planet Ilmatar, under a roof of ice a kilometer thick, with a team of deep-sea diving scientists to investigate the blind crustacean race living on the sea bottom.

Humans aren’t alone in space, the Sholen, a six-limbed space-going race with a semi-communal mindset also travel the vacuum. Terrans and Sholen have made an uneasy truce, one aspect of which is similar to the non-interference Prime Directive familiar to Star Trek fans. So long as they don’t disturb the Ilmataran habitat, humans are free to conduct their scientific missions in peace.

But when Henri Kerlerec, media personality and reckless adventurer, ends up sliced open by curious Ilmatarans, tensions increase, and when a Sholen ship arrives on the surface of the planet it becomes clear that a diplomatic disaster, or worse, will ensue. The leader of the Sholen soon exhibits a hostile, military stance, and the humans are caught in the middle between their rivals in space and the natives of the planet as alien cultures collide. Both sides seek the aid of the newly enlightened Ilmatarans. But what this struggle means for the natives—and the space going races, is uncertain.

To say more would be spoiling the book for the reader. I got more and more caught up in this one as I read until I couldn’t put it down. Very nice. I’d like to see a sequel.

6 Responses to review: A Darkling Sea by James L. Cambias